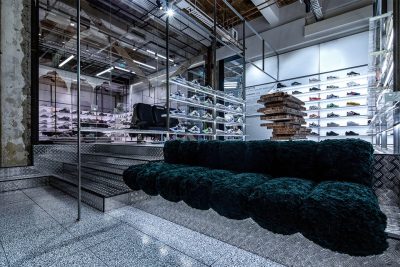 Subtype is a footwear boutique that has freshly opened a breath-taking flagship store in the Hero building, Melbourne. The overall space was calculated and projected by the Melbourne creative studio, named Noise Noise Noise. The store merges a series of galleries, installations, a hidden brand activation room and enormous fitting rooms. An industrial space, opting for an ever so futuristic yet geometrical level of sophistication. Subtype’s utopian aesthetics are placed in contrast against a semi-exposed structure, which enriches a profound association between the building’s past and future. The space has opened its doors on April the 20th, following the release of Adidas AlphaEdge4D sneaker. The event was planned alongside a hypervision projection, laser art and irradiated footwear bases, all combined with the structural meek sole of the AlphaEdge4D.